This is for those of you with the stuck (frozen) parking brake (emergency brake) on 1997 or newer F150s and F250s with rear disc brakes that have an inner drum brake used solely for the parking brake.

I purchased my 1997 F250 4WD new in late '96, and within a few years my parking brake was frozen. To a some extent this is my fault because I almost never used the parking brake, but it still shouldn't get stuck that quick. I should add that I live in snow country and they use a lot of salt up here. I used to do my own brakes when I drove beaters, but with my new vehicles, I figured I'd let the pros do it. The problem with "pros" is many of them don't know what the hell they are doing, but more on that later.

Well, when I took it in for the 1st brake job about 4 years after I purchased it, the "pro" told me they would have to disassemble the rear axle to fix the frozen parking brake (btw, this is total bullshit) and it would cost a small fortune, and that they suggest I just leave it as is. So I did.

My next brake job, I took it to another shop and they said they could probably fix it and it shouldn't be a big deal. They did, I was very pleased, but within 6 months it was stuck again even though I made sure I engaged it at least once a month.

Jump ahead to 2011 and I'm ready to start working on my own brakes again. The "professional" brake jobs I've had in the past were crazy expensive (typically about a grand each) and I wanted to take a shot at that parking brake problem myself. Or, I at least wanted to see what exactly was causing the problem. 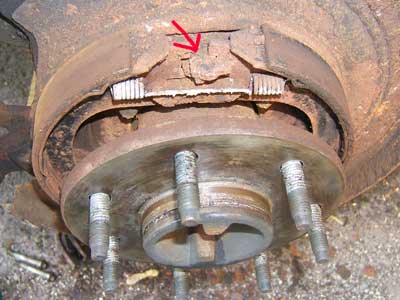 Yeah, that's a lot of rust. The red arrow points to the mechanism that is supposed to engage the parking brake.

Yes, I realize I didn't explain how to get to this point, but I'm not going to spend a lot of time on that because there's nothing unusual up to this point. You basically have a combination disc brake/drum brake where the small drum is part of the rotor. So when you do a brake job here, you have to do both a disc brake job AND a drum brake job. You need to remove the disc brake caliper to remove the rotor/drum. Fortunately the rotor/drum came off pretty easy for me. The only tricky part was that the star adjuster didn't align correctly with the slot (there are a lot of tutorials online that show you a basic drum brake and disc brake setup). 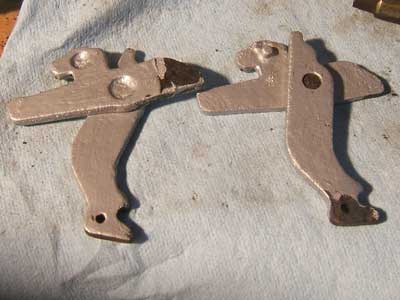 And here's what they look like after I spent a little time wire brushing and grinding the major rust off and then painted them with a some Rust Bullet (it's expensive, but it works great). These are both sides, and I should note that the point where they pivot (the pin in the middle) actually comes apart. So I really have 4 pieces here. The reason they freeze up is the flat areas slide against each other when you engage the brake, and it doesn't take much rust to lock those flat areas together or provide enough friction that they don't return to their original position when you try to disengage the brake.

As you can see, there are a couple of spots that didn't get coated. That's simply because I needed some way to hold them as I coated them, and those parts are not going to be a problem if they don't get coated.

You're supposed to do multiple coats of Rust Bullet, but that might have built up too thick and I didn't need that much protection since I was going to grease the hell out of them on installation. Make sure you use a high-temp brake caliper grease otherwise you risk the grease running when the brakes warm up. 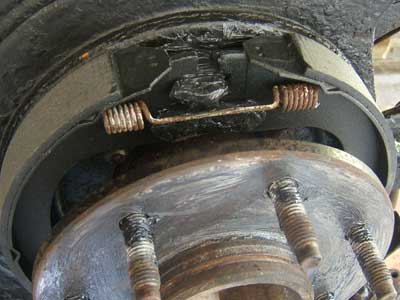 You can't clearly see the mechanism in place here because of all the black grease I put on them, but you get the idea. Obviously I installed new brake shoes at this point as well. That's another problem with this setup, you don't wear out the parking brake shoes, but they tend to fall apart after about 4 or 5 years.

Well, I'm going into my second winter after doing these, and my parking brake is still working fine. Ideally, you would occasionally regrease these, but it's kind of a pain in the ass removing the caliper and the hub rotor just to grease the mechanism. You may be able to get a little grease in there from the back side, but you have to be very careful when using grease around brake surfaces.

I originally did this article in 2012. About 7 or 8 years later, I did these brakes again. The parking brake was still working from my previous repair. It was the grease that did the trick (a lot of high-temp brake caliper grease). The rust bullet I had put on there had actually peeled off (possibly due to it being encased in a lot of grease), so that was disapointing, though I have had better luck with rust bullet under paint.  lSo the parking brake was fine, unfortunately I had some other problems due to rust. The star adjusters were completely frozen due to rust, and the brake backing plates were in pretty bad shape. Actually the entire undercarriage of the truck was seriously chewed up by rust. I have since traded it in and got a newer used 2010 F150, that has a very similar design (though not identical).