Say NO to companies that participate in Automatic Renewal Scams

. . . or Why I no longer subscribe to Popular Mechanics or PC Magazine.

But back to these automatic renewal notices and invoices I started receiving. I'm going to focus on the Popular Mechanics subscription because that one really pissed me off. I started receiving invoices from them (The Hearst Corporation) stating that "As you requested, we renewed your subscription for another year". As already mentioned, I certainly had not "requested" this. I looked over the paperwork I received for any information on how I can cancel this automatic renewal. Not only was there no reference to any means of canceling the subscription, there was also absolutely no contact information whatsoever on the invoice with the exception of the mailing address for my payment. I also spent a little time on the Popular Mechanics website looking for information on opting out of automatic renewals, but came up empty. This is why I call this a Scam. It is obvious that they are intentionally making it very difficult for their customers to opt out of automatic renewals. I can only assume they have the expectation that their customers will simply give up and become subscribers for life.

Well, the invoices kept coming, and with them, ever increasingly threatening letters. One letter started out by saying:"When you ordered your subscription with the convenience of being billed later, we fully believed you would send payment upon receipt of your invoice. Since we have no record of your payment at this time, your good standing with us is at risk."

So I decided to start looking through my magazine for contact information and found a reference to "Subscription Questions" which gave the website service.popularmechanics.com.  On that site, there is a list of subscription options and one of them was "Renewal Notice Information". If you click that, you get some more optioins, with the final one leading to a form to be removed from the "continuous service program". But there is still a catch. You need to enter your name and address information EXACTLY as it appears on your subscription. Then if you get past that, you have to enter your email address (I'm assuming they are hoping that some people may not want to give them their email address).

But does it end there? NOOOO!!! I received an email stating that my correspondence is being sent to a Customer Service Representative for proper handling. Then, a month later, I get another invoice and a really nasty letter. I've included the letter below. 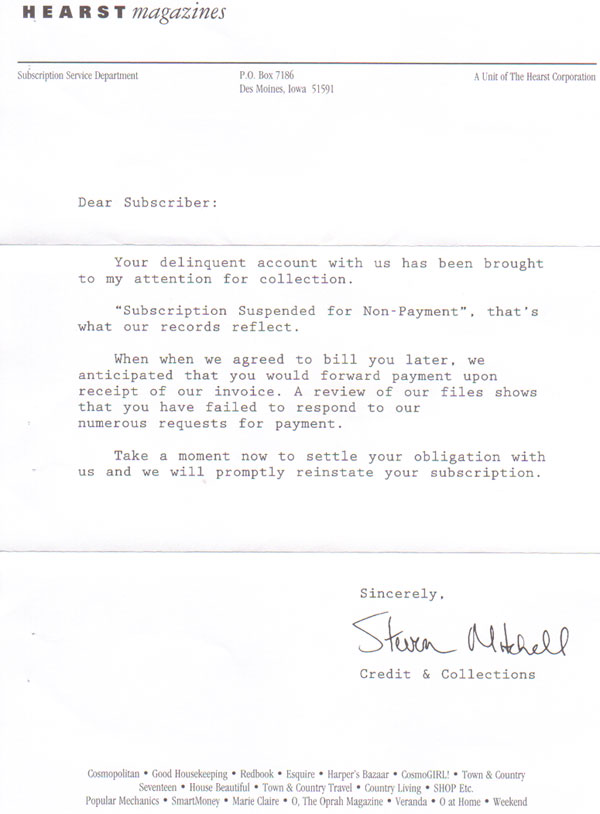 Once again, I want to mention that I got this letter a month after I opted out on their website. I opted out on 11/17/2006, and the postmark on the nasty letter was 12/11/2006. Once again, they are still hoping to scare me into paying for something I never requested in the first place. Fortunately they include a list of some of their other magazines on the footer of the letter so I will know which other magazines I don't want to ever subscribe to.

My other  automatic renewal  subscription (with PC Magazine) was a little easier since I had already been through the process with Popular Mechanics. Also, PC Mag was a little better because they actually included a reference to http://service.pcmag.com on the post card they sent about my automatic renewal. However, I had a hell of a time getting my name and address EXACTLY right on the web form. I finally figured out that my last name was actually in the field for the first line of the address in my subscription and that's how I had to enter it in the web form. Now I'm not absolutely certain that that is not how I entered it in the original subscription, but I suspect this could be just another part of the scam.

Even though PC Magazine is published by Ziff Davis, I suspect there is some connection with Hearst Magazines since the web address format and the opt out process was exactly the same.

Companies pull this kind of crap because it works. And while I'm not surprised to see these types of practices, I was very surprised to encounter them with well-established magazines such as Popular Mechanics and PC Magazine. But I guess that just goes to show that these companies are so confident that they will make so much more money by using these types of practices, that they are willing to risk their reputations on them. The only way to stop this, is to not do business with companies that operate this way.  I like Popular Mechanics and PC Magazine, but I will read them no more. Nor will I subscribe to any magazine that is published by either Hearst Corp or Ziff Davis or any other publisher that uses a default automatic renewal with no easy way to opt out.