My experience in using asphalt shingles on a low-slope roof.

I recently did a tear-off and re-shingled a 2 1/2 : 12 pitch hipped roof on a small addition on the back of my old house. Now I happen to have a unique insight on this because I also did a tear-off and re-shingle of that same roof 22 years prior to this (in 1989). Fortunately for me, there was no internet back then or I might have been very confused.

The internet is great, and I've gotton a lot of very useful information from it. But there are a far too many people that post in internet forums that pretend to be experts and tell you all the things that you cannot or should not do. I refer to many of these people as "Repeaters" because they basically just repeat stuff they've heard or read somewhere.

I mention this because when I started doing some research online to get some tips on my upcoming re-roof, I encountered numerous posts by people that claim to be professional roofers saying stuff like "I would refuse to put shingles on anything less than a 4:12 pitch roof" or "you'll void your shingle warranty if you do less than a 4:12 pitch".

Now I'll admit that my 2 1/2 : 12 pitch roof has a very shallow pitch to it and is far from ideal, but a 3:12 or 3 1/2 : 12 is not that bad. And as the the "void your shingle warranty" comment, I mean come on, shingle warranties are total bullshit anyway. They're selling asphalt shingles with lifetime warranties when they know they will likely last somewhere between 15 and 35 years depending on variables such as climate, pitch, etc.

OK, enough of my rant. The truth is I did learn a few things and figured I'd share them with others that may be considering putting asphalt shingles on a low-slope roof.

My house is 80 years old, and the low-slope addition on the back really isn't an addition since it was original to the house, but it has its own separate roof with a different pitch from the other roofs on the house. So basically I have an 80 year-old low-slope roof that has somehow managed to survive all these years with asphalt shingles on it. When I did the tear-off 22 years ago, it actually had 3 layers of old asphalt shingles on it.

I'm not going to say all was fine and well though. I did have a small leak back then before I did the re-roof 22 years ago, and there were some spots where I had to replace decking. But that's not unusual for any old roof, and they really shouldn't have put that 3rd roof on anyway. And I would have liked to get more than 22 years out of the roof I put on back in 89, but the low-slope combined with the southern exposure does shorten the lifespan of the shingles (the same shingles are on other portions of the house and I may get another 5 or 10 years out of those). 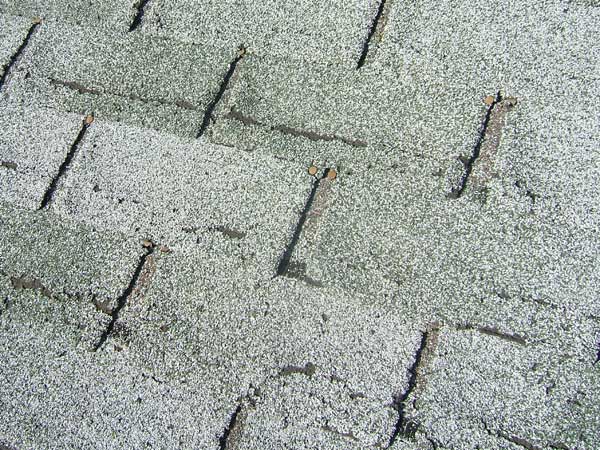 But the fact is, I got 22 years out of asphalt shingles on a roof with a 2 1/2 : 12 pitch roof without any leaks (a bit surprising considering the photo above). So while not ideal, it's not as bad as some may lead you to believe.

And by the way, the manufacturers instructions I reviewed for the shingles I was interested in buying described installations down to a 2:12 pitch. They typically had different underlayment recommendations for low-slope roofs (2:12 to 4:12 pitches), but that was about it.

This is where I learned something new, sort-of. Not surprisingly, my old shingles were the standard 3-tab shingles. The current trend in asphalt shingles are the laminated shingles often called "architectural shingles" and I didn't know a damn thing about them other than they are supposed to be more aesthetically pleasing and they tended to come with longer warranties. I did see some forum posts mentioning that 3-tabs were preferable for low-slope roofs, but no one really elaborated on why.

I would have been perfectly happy installing 3-tabs since I already knew how to install them and you really couldn't see the shingles on this roof anyway.  My dilemma? The 3-tabs came with 20, 25, or 30 year warranties, while I could get the laminated ones with 40 years or lifetime warranties. Now I already mentioned how the warranties are total bullshit, so I didn't believe I would get 40 years or lifetime out of the laminated shingles. But would the laminated shingles last longer than the 30-year 3-tabs?

I couldn't find any real information on that, nor could I find anyone that could tell me if they would or why. So I'm stuck having to speculate.  I think it's doubtful the base material or surface granules used for the laminated are any different than those used for the 3-tabs, but what about the construction? The laminate shingles are laminated (duh!), which means they have multiple layers (typically 2 ) of the base shingle material in some portions. But since only portions of the shingle have this double layer, there are portions of the exposed shingle that are no thicker than the 3-tab shingle.

When I look at the old 3-tabs on my house, I can see that as they aged, they would sort of shrink due to the edges curling (the ones in the picture curled down, but I've seen others that curl up). The 3-tabs have more edges than the laminated so that could mean they have more areas where curling can be an issue. Also, even though the laminated shingles are only doubled in some areas, that still should make it more rigid overall and may prevent some of this curling.

So I guess the laminated shingles have some characteristics that may result in a longer life, though I'm not really believing they are going to last 20 years longer than the 3 tabs. But just to confuse this a little more, the hip and ridge cap shingles used with the laminate shingles I was looking at were not laminated and therefore were probably exactly identical to 3-tab shingles, yet they were warrantied the same as the laminated. Huh?

I'm not going to kid you, this is all pure speculation on my part. But that's all I have.

This was a tough one and I kept flipping back an forth on it. The laminate shingles may potentially last longer but may not drain as well and therefore may be more likely to leak. I already knew how to install the 3-tabs and I know they work on this roof, but I also know they may need replacing in another 20 years.

I decided to go with laminated shingles. Why? I'm not really sure.

The next decision involves deciding on the underlayment. The instructions for the shingles I used, and some of the others I looked at called for either a double layer of 30 lb felt, or covering the entire roof with Ice and Water Shield. I had previously used Ice and Water Shield around the perimeter of this roof when I did it back in 1989, so I had some experience with it. In fact, I wrote an article on Removing Old Ice and Water Shield from Roof you may want to read.

The I&W shield does a great job of sealing out water, but it can problematic with future reroofs or repairs. It's also a bit expensive, but that wasn't really an issue with the small roof I was doing. I've also learned over the years that water/moisture is a complicated issue, and there have been a lot of products and methods used over the years to "seal" out water, that ultimately ended up sealing in moisture. So I've gotten a lot more conservative with the use of these types of miracle products. That said, if your attic is properly ventilated, it's probably not going to be a problem.

In my case, since I had previously done the roof with a perimeter of I&W shield, and the remainder of the roof with 30 lb felt, and had no leaks. I chose to go with what worked for me in the past.

I should note that this roof is somewhat sheltered from the winds that we get with typical storms, so it really isn't subject to driving horizontal rains that could potentially be pushed under the shingles. Under those conditions, I would probably have opted for using the I&W shield over the entire roof. 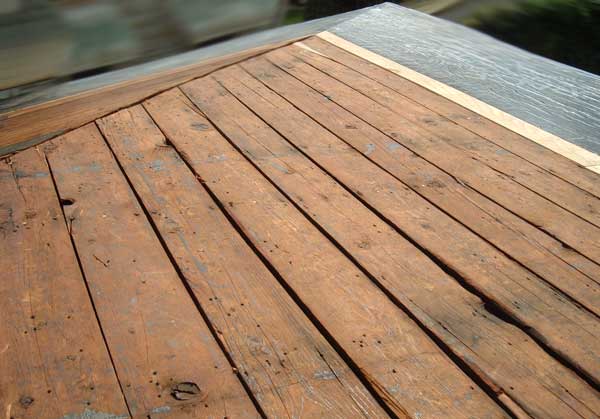 As you can see, this is the bare roof with some I&W shield already applied to the perimeter (the upper right edge of this photo). The main upper portion of the roof that has only had felt paper and shingles on it for the past 80 years is still in pretty good shape. Why mess with success. 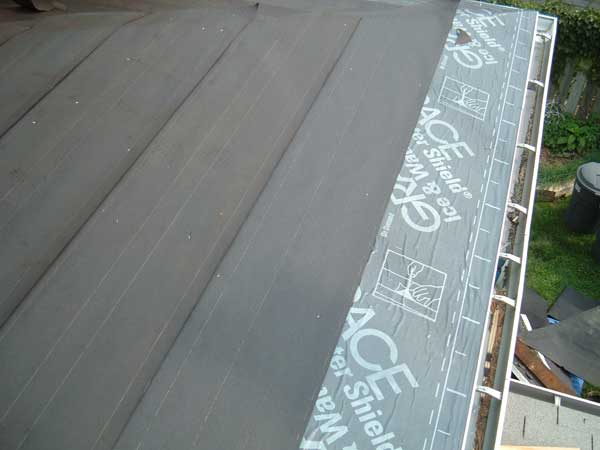 Here's how it was with the underlayment applied. The 30 lb felt is put down with an overlap of 18 inches. This is what results in the double layer. I really didn't need to overlap the I&W membrane by 18", but it was actually easier to do it this way.

I should also mention that there are new synthetic underlayments now available that are supposed to be "superior" to felt paper. When I started looking at the manufacturers sites for these products, they mainly were focusing on the ease of installation, the length of time you can leave it exposed to the elements, safety features (slip-resistant surfaces), and cost (it's more expensive, but lighter weight, less bulky, and easier to apply). Basically, all features that appeal to the contractors installing the stuff, but I didn't see much to make me believe it was all that superior as an underlayment. It may be, but like many other building materials, you need to wait a couple of decades or more to know for sure. For me, the choice was even easier though, The synthetic stuff came in rolls that were far more (many times) than I needed for my small roof. So even though the cost per square wasn't bad, I would have been buying way too much of the stuff.

Well, there you go. I'll put a reminder on my calendar to post an update in another 20 to 25 years. So you may want to check back sometime around 2035.